In the latest instalment of “Mick talks to…”, I sit down with achilles tendon expert Dr Peter Malliaras to talk shop about how we as clinicians can manage our achilles tendon patients better. For those that don’t know Peter, he is a physiotherapist and researcher from Melbourne, specialising in tendinopathy. In 2006 he completed his PhD in tendinopathy and has co-authored over 70 peer review publications. Currently, he is an Associate Professor at Monash University Physiotherapy Department and involved in multiple tendinopathy research projects and groups in Australia and internationally. He maintains a strong clinical focus, specializing in difficult tendinopathy cases and regularly consults to elite athletes.

I was very lucky to grab a few minutes of Peter’s spare time, and as you’ll soon discover, I find some very practical ways that we can all implement immediately to help improve outcomes and function in our achilles tendon patients. So without further ado, here is our chat…

Mick: Thanks for your time to sit down and talk today Peter! Now, you've published work in both achilles tendon and patella tendon pain, but today we'll be keeping focused on the achilles tendon. For those that don't know - what is achilles tendinopathy, and how does it typically behave?

Peter: Achilles tendinopathy is an overuse, load-related injury that commonly affects the middle-part of the achilles tendon. It is characterized by localised pain in the middle of the achilles tendon; often felt during high-load activity such as running or jumping. Typically, the pain goes away (or reduces in intensity) for most part of the activity, only for the pain to come back within a few hours after stopping the activity. The next day, the first few minutes of the day can be quite painful and stiff when walking.

Peter: They do differ. With the insertional tendon problems, the thinking is that they are much less likely to tolerate compressive loads, and we have to be very careful about compressing the tendon and loading the tendon in the ends of range, especially under heavy load. An example of this is doing heel raises, with or without load, over the edge of a step. One would also need to be careful not to compress the tendon during typically prescribed calf stretches.

With the mid-portion achilles, however you don't really need to be concerned so much about compression (doing heel raises off the edge of a step and calf stretches), but rather you need to be careful of pain in the middle part of the tendon, with high loads (running, hopping, jumping) being typical of what one needs to consider and the pain associated with such activity.

Mick: Thanks for clearing that up! So for the rest of the blog, we're going to focus on the mid-portion achilles rather than the insertion. Typically, I see in the clinic a scenario where the patient comes in after they've rapidly increased their running and develops mid-portion achilles tendon pain. They often report resting for a few weeks until their symptoms subside, only for the symptoms to come back again when they return to running. So, if rest doesn't particularly help, how can we manage our patients better?

Peter: Rest doesn't help, and clinicians should not recommend rest for achilles tendinopathy - for most of the patients you see with achilles tendon pain anyway. In saying that though, some people do require a period of rest; especially If they're having a lot of pain, and are intolerant to load, then they may require a rest for a brief period of time.

Now rest needs to be qualified though. It's not complete rest - doing nothing at all - and we certainly should not be advising patients to go into a MoonBoot (unless that have a constant >6/10 pain). The rest would be relative to what their current level of activities are. For example, if they are a runner they should consider taking a break from running for a short period of time but instead, do cycling/swimming and heavy, slow resistance training to rehabilitate their achillies tendon and calf. Now some people do require going into a boot, but that's a very small percentage of people that will require that level of off-loading. I think it is important to note that it is sometimes something we do, but generally it's not recommended.

Peter: I would say they all play a very limited role. Basically, the simplest way to describe management of an achilles tendon pain patient is to give them the right type of advice about pain, and importantly allowing them to have a positive, healthy relationship with pain. The other important thing to do is to load them progressively back towards their previous level of function (and beyond).

Now, things like massage, dry needling, shockwave therapy; they can all be helpful, but they will only be necessary if you are struggling to get people thriving with their progressive exercise program. For example, I use shockwave a lot in the clinic; and it's just because I have access to it. Sometimes I use it for compliance, because some patients - and this is a bit cheeky to say and to do - but some patients won't do their exercise, but they will commit to three weeks of shockwave therapy because they perceive that to be better. Therefore you get them in, you do the shockwave, and at the same time you filter in all the exercise and other stuff you want them to do.

Mick: Yep, that's fair, and very cheeky mate! So we have started to see that isometric strengthening can be helpful in the reactive stage/intolerant stage of an achilles tendon. There has been however a bit of debate lately about how successful isometrics are at decreasing tendon pain. What's the current thinking regarding isometrics to manage mid-portion achilles tendon pain?

Peter: There are two studies for achilles mid-portion. There's one that Seth O'Neil did that showed that it really is inconsistent (the pain benefits that people get). Basically, some people respond well to isometrics. Others don't. We also did a study on 11 mid-portions and have shown that they did get better, but not very much, so maybe it's only one or two points on the numerical rating pain scale rather, than Ebonie Rios’s initial work on patellar tendon that showed a six point change.

I think what's happening is we're realizing that isometrics probably do work, but the two main questions are, are they necessarily better than other types of loading? And the second one is, how can we explain the variability that seems to be apparent in peoples' response?

Mick: So basically, there's no harm in doing isometrics, but whether or not they're better than doing isotonics?

Mick: So for achilles rehab, strengthening and progressive loading seems to be the key feature of a successful program. What muscles are the most important to strengthen and why?

Peter: Some people will be very surprised by this, but the soleus is probably the most important muscle to strengthen for people with achilles tendon pain. The soleus is a very powerful muscle, however is generally not as targeted in rehabilitation as the gastrocnemius, which is more easy to target with the standing calf raise.

An interesting fact about the soleus is that it has the highest physiological cross-sectional area of any muscle. It contributes a lot to how efficient we are as humans at walking, so we can walk for hours and hours and that's largely down to the soleus activity.

Mick: That’s really interesting! So if you were to prioritize one or two muscles, you'd certainly be going straight after soleus and gastrocnemius. What about the kinetic chain? Glutes, quads and hamstrings obviously need to be considered as well?

Peter: Yes, I agree but the thing with the kinetic chain is that I think we need to be convinced that people actually have genuine deficits in their kinetic chain that need to be addressed. I often see clinicians fall into the trap of focusing on glutes/hamstrings at the expense of other things (soleus/gastrocnemius) when these muscles really aren’t an issue. Ultimately, we just need to be convinced that yes, these other muscles are an issue, and then by all means, they should be part of the plan. 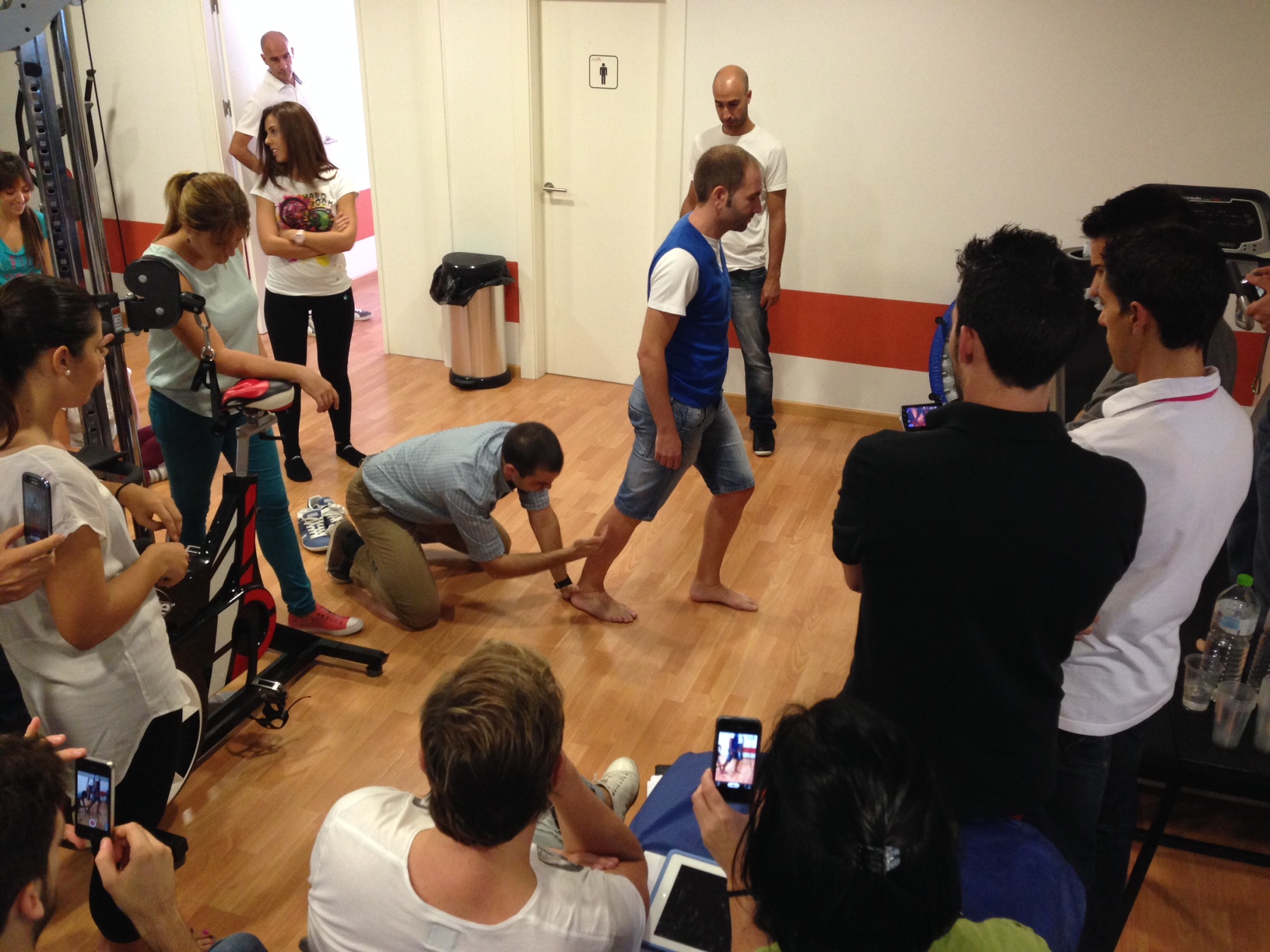 Mick: Yep, I agree. Great points made there Peter. So what role does load management play in rehab, especially when we're looking to get someone back to return to running and training after an extended break from training? Is it just for elite athletes, or do the principles apply to non-elite patients?

Peter: I think it does. However, initially I tend not to worry about acute chronic ratios until they get to a reasonable level of running, because initially they can progress very quickly because they are starting from basically zero. Once they are six to eight weeks into a running program, and they're running a decent amount, then I start to think about the ratios. I think it's critical for them preventing injury and looking at monitoring. I give all the athletes the spreadsheet where they're able to then monitor acute chronic ratio going forward.

Mick: Yep. Very good. In a perfect world, we wouldn't have achilles tendon pain that disrupts physical activity. Is there anything that can be done to prevent achilles tendon pain onset in the first place? Or if there isn't, what would be the best thing to do to reduce the risk?

Peter: I think you can prevent achilles tendon pain, but it's a two-pronged answer. If you've got an athlete, then it definitely comes down to good load management and high levels of soleus and gastrocnemius strength. If you've got a non-athlete, then it probably comes down to general health management. So things like a healthy lifestyle to reduce the chances of diabetes. But unfortunately for some people, they don’t have much control over the hand they’ve been dealt with. For example, their genetic profile, as well as hormone issues for females, which are probably partly modifiable. General health, hormones, weights, obesity, BMI, waist girth, all these things can be modified to reduce the risk of tendon pain.

Mick: Good one. In finishing up, can you give the readers out there three key messages to help manage their mid-portion achilles tendon pain?

Peter: Okay, the first one would be have a healthy attitude towards your pain. So basically don't stress about it, but don't ignore it. The second one would be, remain as active as possible within your pain limits. And the third one would be, think about a good progressive exercise program over 12 weeks or longer.

Mick: That’s wonderful advice Peter, and thank you for your time and expertise mate. I really appreciate your time today and I’m sure the readers out there have learnt something today, because I certainly have!

For those of you who are looking for more education and information regarding tendon pain management, you can follow Peter on Twitter and via his own blog.

Enrol in our 'Athletic Ankle Masterclass'

Join Dr Sue Mayes & Ebonie Rio in this Masterclass about one of the most complex structures to diagnose and rehabilitate: the posterior ankle!